Is Architecture a Hard Major? 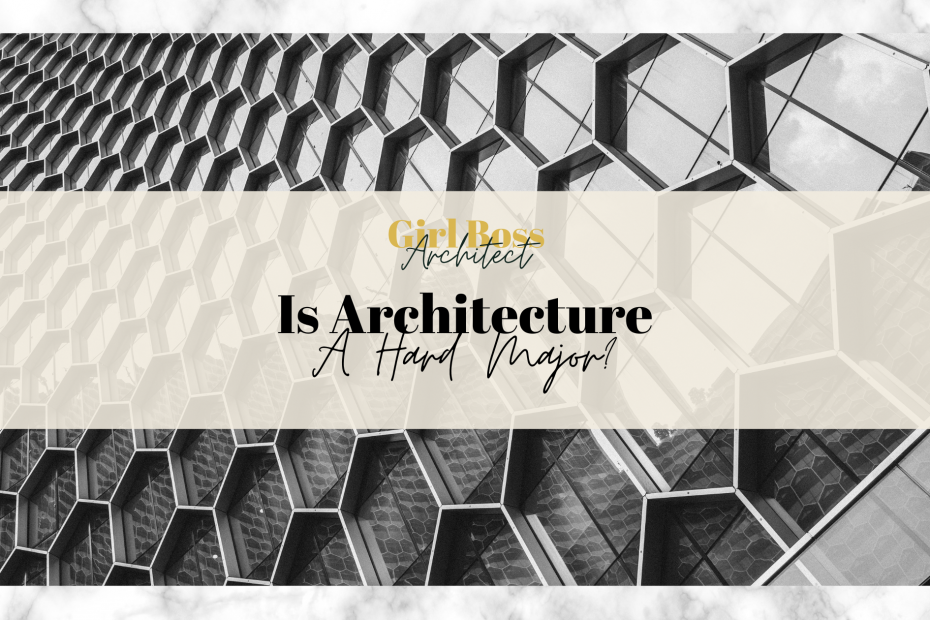 Thinking about studying architecture? Heard some rumors as to what it’s like? Let’s clarify how hard it could be.

When I decided to study architecture, it was an easy decision. That’s because I had no idea what it would be like.

Although I have no regrets, it is a decision you wouldn’t want to take lightly.

Architecture is a hard major. But some hard things are worth it. Others are not. Let’s talk about what you can expect.

What is an architecture degree?

An architecture degree is a bachelor of science degree you can take if you want to practice designing buildings and landscapes.  To become an architect, you typically need to go through five years of architecture school, with a 2-year apprenticeship after. Then, you’ll have to pass the board exams to legally sign the plans you design.

Of course, an architecture degree doesn’t always mean you’ll become an architect after taking it. Albeit, that would be the common scenario. Because it’s a creative and technical major, you’ll likely find a lot of career opportunities from it.

Is an architecture degree hard?

To put it simply, studying architecture is hard. It’s likely one of the hardest majors you can take. It combines your creative and critical thinking skills. Considering the costs, it’s probably not one you can “try” and then get out of easily.

Contrary to popular belief, it’s not the Maths that make it hard. It’s the heavy workload you’ll have to take on and the number of criticisms you’ll likely get — given that it’s also a subjective design course.

Yes, you have to be good at math, but you’ll also need to be good at other subjects. That’s a given. But let’s dive deep into the potential challenges you might meet.

1. Subjects in architecture school are not ordinary subjects.

You’ve probably heard that being an architecture student requires you to complete a lot of design plates. These plates take a while to finish. They will need a lot of brainpower aside from your drawing skills. Not to mention, there are many subjects requiring these plates. And you’ll likely have multiple plate deadlines in a week.

That said, you’ll also have regular subjects. So, if you’re struggling with Calculus, for example, just think of the amount of time you’ll have to allot to study and draw.

Some subjects require manual drawings (drawings by hand). But subjects that allow for digital plates (i.e., those you can do with Computer Aided Design) will help you get plates done faster.

2. Many skills are required to succeed in the architecture field.

Think of any skill. You’ll likely need that.

Also, contrary to popular belief, you don’t need to be great at drawing. It just has to be good enough to communicate your ideas. That said, there are those subjects (likely minor courses) that grade you based on how good your drawings are. These are likely Visual Techniques courses that teach you how to draw.

Your critical thinking skills need to be good too. Being an architect isn’t about designing what you want. It’s about solving problems through spaces. In a design plate, you’ll be handed a problem (i.e., a client who wants a specific project). You’ll have to propose design solutions that will make that project successful.

There are plenty of things to consider in design. Some of them are lighting, elevation, transportation, noise, and budget.

Keep in mind that architecture isn’t a solo field. Unlike other careers where you can become a digital nomad, architecture is a collaborative field. And that collaboration starts in the classroom. You need to know how to work together, how to cooperate, how to exchange ideas, and how to harness your best skills to contribute.

Personally, developing people skills in the actual practice of architecture is a lot harder than the work itself. When you practice in the real world, you’ll be working with engineers, contractors, suppliers, and clients. It’s best to know how to handle and work with people with different ideas early on.

3. Architecture is a competitive industry.

There are a lot of career opportunities after studying architecture. That said, it’s a very competitive industry. Construction is in demand, and there will always be new projects — unless everybody decides to stop building anything.

Take it from the perspective of architecture and construction firms. From a pool of hundreds or thousands of architecture graduates, who will you choose? Not every company will have an overwhelming amount of applicants. Some will even have high turnovers. But the point is, you’ll want to stand out given that there are a lot of you who studied architecture.

Yes, money-wise, it costs a lot. You’ll need cash for your drawing tools, laptop, and a very expensive tuition fee. Unless, of course, you qualify for a scholarship.

But that’s not the only cost. It’ll likely cost a lot of imbalance as well. You’ll lose time for family, friends, and yourself. It’s best to manage your energy and time, so you don’t end up burnt out. But that’s a very challenging thing to do.

Now, this depends on the company you apply to. But it’s a common thing you’ll likely hear. The amount of investment, energy, and effort spent won’t always be returned in cash.

It’s best if you’re genuinely passionate about the course. Albeit, it won’t be the smartest financial move.

Architecture is absolutely hard. I’ve never heard anyone say it was easy, except for those people who didn’t study architecture themselves. That doesn’t mean it isn’t worth it. The answer to that will be up to you.

With architecture, you’ll have to invest a lot of things — time, money, energy, and effort. There will also be a lot of opportunity costs, despite having opportunities in the future.

This site uses Akismet to reduce spam. Learn how your comment data is processed.

We use cookies on our website to give you the most relevant experience by remembering your preferences and repeat visits. By clicking “Accept”, you consent to the use of ALL the cookies.
Do not sell my personal information.
Cookie SettingsAccept
Manage consent

This website uses cookies to improve your experience while you navigate through the website. Out of these cookies, the cookies that are categorized as necessary are stored on your browser as they are essential for the working of basic functionalities of the website. We also use third-party cookies that help us analyze and understand how you use this website. These cookies will be stored in your browser only with your consent. You also have the option to opt-out of these cookies. But opting out of some of these cookies may have an effect on your browsing experience.
Necessary Always Enabled
Necessary cookies are absolutely essential for the website to function properly. This category only includes cookies that ensures basic functionalities and security features of the website. These cookies do not store any personal information.
Non-necessary
Any cookies that may not be particularly necessary for the website to function and is used specifically to collect user personal data via analytics, ads, other embedded contents are termed as non-necessary cookies. It is mandatory to procure user consent prior to running these cookies on your website.
SAVE & ACCEPT